It seems these are the only time I blog anymore – that’s not good, but at least these get me doing something!

Saturday Scribblers is the fun blog prompt where Dean Kealy posts a scribble for us to make into a drawing. Participation goes all week, despite the name. Here is this week’s scribble: 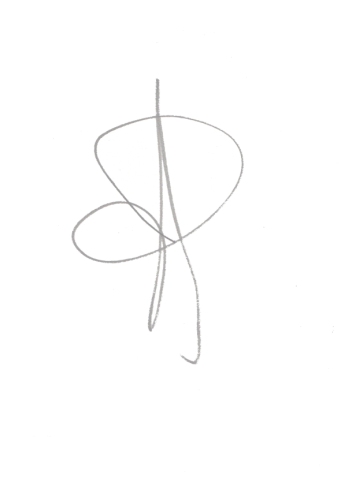 I admit, it took me a little bit to come up with something, but once I started doodling on top of it, I had my butterfly princess:

I’m pretty happy with her – she looks a bit Native American to me.

Other than that I did get some book covers and the Turtle Page done today, and I have been working on the Patrick prequel novel (I have a poll to help choose a name and would love input on it!) And beyond that I have been playing the new Pokemon Go. I primarily am doing it to make myself walk – in the first week I walked 38 miles just playing it, which is waaaaaaay up from my usual weekly walking. The brother and hubby are also playing, so we’re walking together. Sadly with the heat the last two days we haven’t done much and probably won’t tomorrow. Ugh on summer!

And now I leave you. Have a pokemon kind of day!

Saturday Scribblers is the cool blog challenge run by Dean Kealy. Every week he gives participants a scribble to turn into something cool. Here’s this week’s 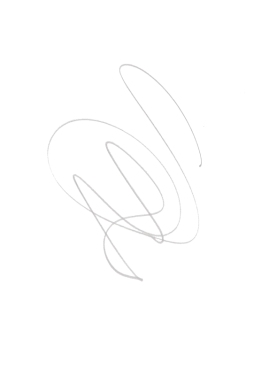 I immediately saw a shrubbery – and turned it into the DIY Bonsai – or how to ruin your shrubbery: 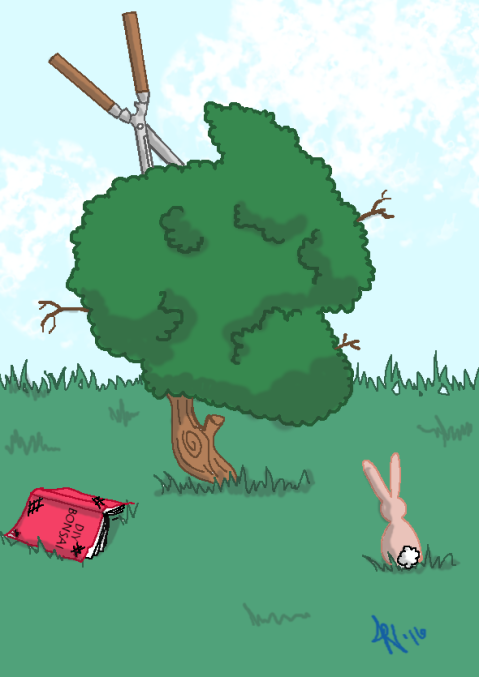 I thought it was fun.

And now I have some Star Trek to watch and then I need to hunt Pokemon.

Have a good one!

I’m doing a combo post this week because I have a lot of work to do to get ready for Book Born’s Birthday Bash.

Saturday Scribblers is the cool blog challenge run by Dean Kealy. Every week he gives participants a scribble to turn into something cool. Here’s this week’s

Blogophilia is the cool blog group where Martien gives participants prompts to use in their weekly blog post. This week’s prompts are:

I really enjoy both groups because they make you pull, out all the stops sometimes and showcase the best of you – or at least the best of your imagination.

Anyway, here’s my work in progress so you can see the scribble in it:

And here’s the final product:

Why is she in blue-green? I dunno. When I initially drew her I had planned to paint it black like Malificent, but then I went with ocean colors instead. I’m pretty happy with it and it took me just over an hour including having to stop to mess with the dog who has been going nuts because it’s been storming all morning.

I should credit the sparkle brushes, which come from Obsidian Dawn and are awesome, by the way. The background texture is mine and is actually some of that silky wallpaper scanned off. Snifty, huh?

And now I leave you all for bed. Have a sparkly kind of day!

P.S. to quote Ferris Bueller, “You’re still here? It’s over!” So go to bed. Or work. Or whatever.

I like humidity, but it was too much today. Yes. I said it. It was too humid. And in the hottest part of the day, like the ninnies we are, we went shooting. 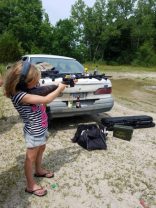 Needless to say, we weren’t there a super long time. It was fun, though, even being short, and we need to go again in October when the weather is decent, ha ha!

In other news my hibiscus is blooming! The first few blooms were oddly white, but they were shriveled when I went to photograph them today and only the pink one was in any shape.

I also got my awesome soap today! yay! 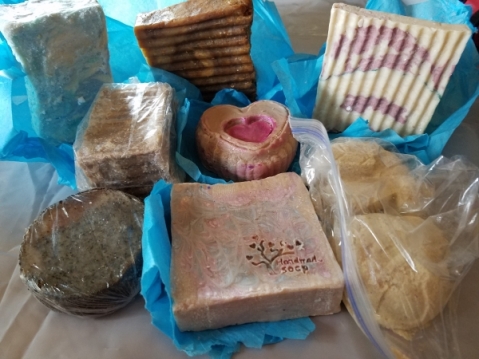 I love this stuff!

And I STILL did NOT get the reveal letter from the Mysterious Package Company 😦 It was two weeks last Thursday, so I wish it would hurry up. I’m a little worried considering we’ve gotten our neighbor’s last two water bills and we got a doctor bill for the people from across the street. What is someone else got my envelope and just tossed it rather than giving it to us? There is a bunch I wouldn’t put it past (not saying who), so… I guess if I don’t get it soon I’ll contact the Mysterious Package Company about it.

Have a scented soap kinda day!

Last year we went to the amazing show at New Market, but because hubby has to work tomorrow we opted to skip it and just try Red Oak’s show this year.

I don’t want to insult them because I’m sure someone worked hard on it, but…well, underwhelming comes to mind. They shot off the fireworks. One. At. A. Time. Just like Shenandoah did when I was a kid (I was eighteen before I saw a fireworks show where they shot off more than one at a time). After Villisca’s really awesome show I was a bit…shocked. I really expected something like this one for Villisca and vice versa.

The pics didn’t come out very good, either, because it wasn’t qute dark enough when they started. 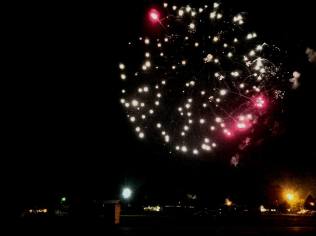 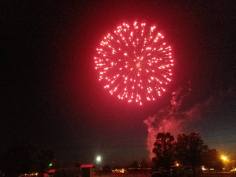 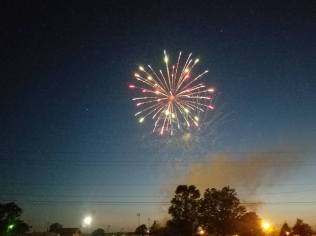 Now that isn’t to say there weren’t some good moments. They had a couple that did a very cool fade thing from one side of the burst to the other, and of course they were all pretty. Just…yeah.

Anyway, we got some stuff done on the house. We worked on the sunroom (no pics of it) and got some of the boxes sorted through and stuff put away. A lot of it is china and whatnots waiting for us to get the &^%$ front room and dining room done, so the best I could do with it was to stack it better, and then there’s a lot of it that goes in the bedrooms, which are chaos in themselves for various reasons. But hopefully by next spring that can get emptied out and we can clean out the storage units and get on with things.

Speaking of getting on, in the sunroom I found the fairytale cups that go in the kitchen cubbie: 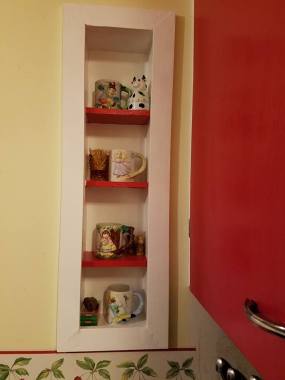 And I got the the first coat of paint on the dining room doors:

an old pic, but they looked the same 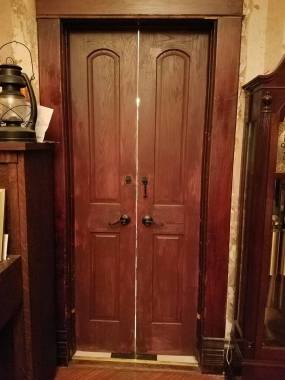 And they finished the quarter round in the kitchen:

And they got some stuff done at Dad’s, so all in all we had a pretty good weekend.

And now I have to lace hubby’s boots and hit the hay myself. This week I have to get stuff prepared for the Birthday Bash on Facebook, and then I am going to start editing the Patrick book, whose title is still up in the air. hopefully I pick one soon. Any sggestions are welcome 😉

Have a fireworks kinda day!

Lots of Freebies, Including the Amaranthine Series

Get the first three books in my vampire series free – and be sure to scroll down for a bunch of other great freebies from some amazong authors.

Also, today and tomorrow only, Stephen Paolini’s novel is free on Kindle – https://www.amazon.com/Blood-Fire-Draconos-Saga-1-ebook/dp/B01HSRHD16/

Shades of Gray is always free, but for July you can also only get Legacy ofGhosts and Ties of Blood for FREE – and get Ashes of Deceit and Heart of the Raven for only $.99 each – that’s five books for $1.98!

How do you get this awesome deal? Head over to Smashwords and enter some codes at checkout:

Legacy of Ghosts – code:SFREE at checkout

How cool is that? And mine aren’t the only free or discounted books this month:

It’s time for Blogophilia, the fun blog group where Martien gives participants prompts to use in their weekly posting. This week’s prompts are:

Ecrits Blogophilia Week 19.9 Topic: The Fight of Your Life
Bonuses:
Hard (2 pts) : Quote Eva Gabor
Easy (1 pt) : Use the phrase ‘are you ready to rumble’

Once again I am down to the wire, in the fight of my life, so are you ready to rumble? Okay, no that’s a little melodramatic. Mainly I am approaching the deadline for posting this – again. Not that it’s a surprise. As Eva Gabor said, “My co-workers expect me to be late.” Or at least my fellow Blogophiliacs. I’d hate to disappoint them!

I had planned to blog more on my mysterious package and our efforts to crack the rune code, but instead you’re getting pictures of Villisca’s fireworks show. I was really impressed with it – it was WAY bigger than I expected. It lasted fifteen or twenty minutes and had a lot of quality moments. I quite enjoyed it. 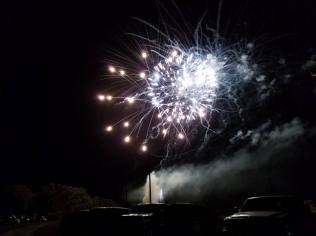 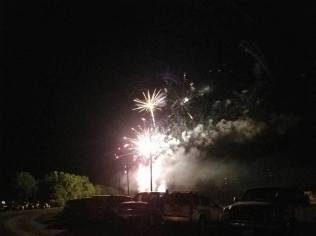 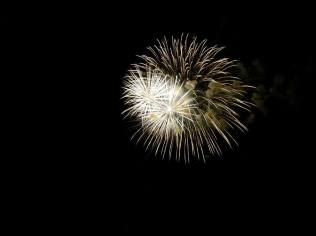 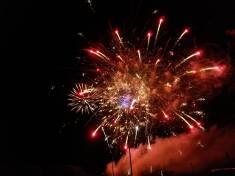 I was also pretty impressed with my Galaxy’s camera because I took these on my phone! Yeah, a huge improvement over the Motorola and the reason I finally betrayed my brand.

And now I am off to bed! Have a fireworks kind of night!